The Splintering Sparks of Our Efforts

Way back in May, OWS held a day of mass activities for May Day. It culminated in a march from Union Square down to Wall Street and a stream of people stretched down Broadway in front of my job–including the black-clad anarchist group that has been attending OWS groups and causing a ruckus. (Interestingly the newspaper reported a very balanced report, even stating that the anarchist group is not an official part of OWS.)

One of the protesters handed me a copy of “The Occupied Wall Street Journal.” The paper covered a bunch of topics, the part that inspired me was the reports of what’s happening across the nation. I think that without media coverage, movements seem like they’re not happening or they’ve failed, or are impotent. The newspaper listed a number of activist victories that covered a wide range of issues from victories against predatory lending measures, the establishment of credit unions, gardening initiatives on empty lots, avoiding foreclosure preventing layoffs, reinstating health care benefits.

The ways that people are engaged in the movement and drawing on the movement are varied. Its inspiring to think that there is energy, bodies, perspectives to draw upon as people are fighting their local fights–even from a movement that looks like it “failed.”

Turning that thought back onto personal life: I think we can never know the true impact of our lives. How we’ve touched others, or how our failed efforts may become the fodder of our next steps, or how splinters of past ideas may become the spark that ignites future success. It comes back to continuing to move forward. If blocked find another path. Keep going and know that somehow, some where, your efforts are causing a flowering.

Per Amazon, during the week of 7/16 and 7/22, I sold zero books. First week of no sales since my sales began to climb. Of course, during that no sales week I was at the Harlem Book Fair selling 15 books by hand in the course of four hours. That highlights the challenge of getting people to know about the book so they can buy it. The interest is there. So how to connect the interested parties with the book? Time for more tap dancing!

READING, FRIDAY, JULY 27: Way back in ye olde 2000, Linda Addison and I were published in Sheree Thomas’s “Dark Matter” anthology. We got to know each other during bookstore events and readings. For Linda, it was a coming out party. She had been publishing in various speculative fiction publications, but no one knew she was black. I had the opposite experience. I had been publishing my weird visions in black anthologies and literary publications, and Dark Matter introduced me to the spec fic world. 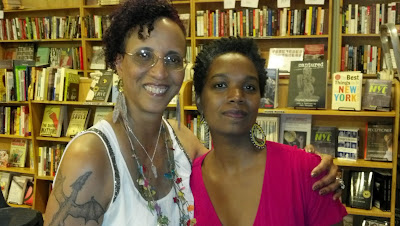 On Friday night at Bluestockings, we discussed what Dark Matter meant to and for us. We talked about synchronicities between the imagery and themes in my collection Ancient, Ancient and her collection How to Recognize a Demon Has Become Your Friend. We focused on two cases of synchronicity in particular. We both have stories dealing with dirt, death, and bones. And we both have stories featuring magical young girls and older female villains. We interviewed each other asking about the horror elements in Linda’s work, the earthiness and sensuality in my work, and I grilled Linda on the mind-bending heart of her zombie love story Unrequited.

Before the Q-and-A, we discussed where we were in relationship to novel writing. Linda has come full circle, delving deeply into the novel she was writing when Dark Matter was published 12 years ago. I am still on the pause button working on some other projects while I work on welcoming in the commitment to get a novel out.

Shout out to all the literary folks who were in the audience, the friends and family, as well as to the gender-queer author who writes darkly and the three young women who have a feminist, speculative fiction book club! This diverse audience asked some engaging questions, including one questioner asking if we’ve ever written anything that scared us. Dark matters indeed!