This weekend, I’ve used the KIS.list to provide information to people three times. Links to art, links to writing, and details about a past event were all documented in my blog posts. Life is so multidimensional–you can think you’re doing something for one purpose, and discover it has an altogether real-life application in your life. Combing through past posts, I realize, in a way, I’ve kept a journal of my writer’s life here. My emotional states, my triumphs, my blockages–they’ve all been captured in this blog series going back a decade+.

This is even more valuable to me now that I feel as if my memory isn’t as sharp as it used to be. What happened a few years ago, can come back into focus, just by reading a post. I forgot some of my topics, and go back and read them and inspire myself with the thoughts recorded within. I decided to quickly make sure all my records of my posts were up-to-date, and to leave behind a record of 2017.

JANUARY
I started the year at Arisia Sci Fi Conference in Boston. I go every year because it’s so close to New York. I got to connect with the community and sat on a panel that explored N.K. Jemisin’s Broken Earth series and discussed role of literature in witnessing, addressing, and resolving trauma. Apropos because When the World Wounds is all about trauma. The conversation was fantastic and it was a real treat to sit on the panel with these intelligent, reflective, honest writers. 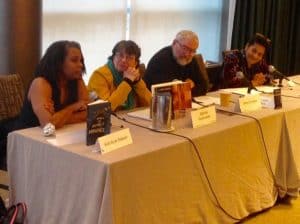 FEBRUARY
In February I went down to AWP to participate in a reading and author signing my publisher Third Man Books was organizing. It was great fun to hang out with the poets published by Third Man and to participate in a raucous bar reading with them all. I was especially thrilled to see in the flesh the new special edition of my book. 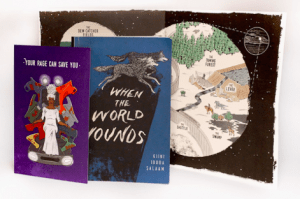 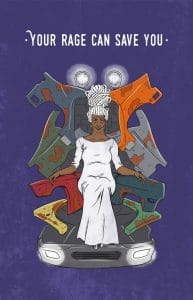 Also, in February, my publisher’s parent company Third Man Records opened a pressing plant in Detroit. I went and had the honor of the first performer ever to publicly grace the stage in the plant (it’s a wonderland of yellow and black with all kinds of gadgets and gizmos). 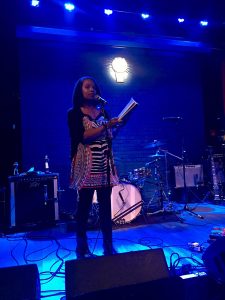 February also brought a review from The Future Fire.

MARCH
In March I returned to the KGB for their monthly reading series. I read with Nova Ren Suma and our stories intertwined deliciously. Debris and disaster ruled both our readings. If you’d never heard me read, you can hear both our readings here. 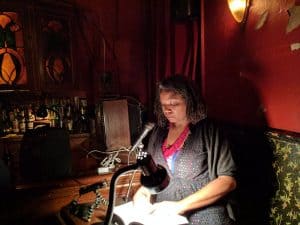 In March, I also participated in the launch of the new anthology Sycorax’s Daughters. My story in the anthology–The Malady of Need–exists in two different versions. In When the World Wounds, the subject of the main character’s desire is male, in Sycorax’s Daughters, the subject of the main character’s desire is female. I literally only changed pronouns and a few biological details, the rest of the story is exactly the same. I met someone at KGB who had read both and commented on her experience of the differences, so that was a thrill.

March brought a review from the Los Angeles Review of Books.

In March, I also answered a bunch of either/or questions that were maddening. You can read my answers here.

APRIL
In April I took a train up to Westchester, NY, for Lunacon. I sat on two or three panels where we delved into interesting discussions about writing and feminisms and presence. I also read my story “The Taming”–which was challenging to read for a few reasons. One, because I hadn’t read it before, so I wasn’t intimate with the rhythms of the story. And two, because it’s from an animal’s POV so the flow of the story is unique. And three, because every time I read my work aloud, I discover things I’d like to change. An early version of “The Taming” is here. The final version is in When the World Wounds. (The characters of the Taming are the inspiration for the book cover art.) 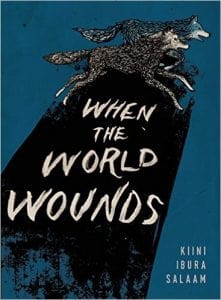 Also in April, Sheree Renee Thomas, pulled together a group of women (including herself) with whom I share history to participation in the Black Speculative Arts Movement Convention in the Bronx. We had many links between us. Sheree published me in Dark Matter and told me about the Clarion West Writers Workshop. Ibi Zoboi was a member of my Clarion class. Sheree, knowing how much it cost to be at the workship for six weeks, asked Jennifer Marie Brissett to throw us a fundraising event at her Fort Greene bookstore Indigo Books. Fifteen years later, we all have books published and we’re sharing a reading—roots branching out into beautiful trees. 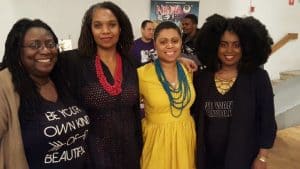 MAY
In May, I finally returned to the Wiscon Feminist Sci Fi Conference after many years away. It was great fun connecting with old friends and colleagues. A delayed plane (they “over-fueled” and then we had to wait to “de-fuel”) made me miss my connection–and the first two of my panels. But I still had a rousing panel conversation about identity as well as an inspiring and luscious reading with my fellow conjure women of the word. 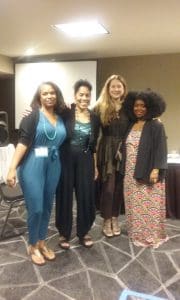 Earlier in May, Third Man Books visited me in NYC and pulled together a group of poets to read alongside the empty McCarren Park Pool. Their words were dark, ruthless, and devastating. Always a treat to gather with wordsmiths. 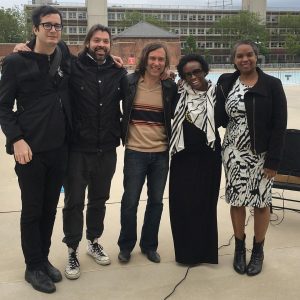 Also, in May, I was included on a reading list inspired by American Gods.

JUNE
I didn’t travel for book promoting in June, but a jaunt up to MassMOCA helped push me to start podcasting again. (Short lived as it was). But you can check out some of them here.

JULY
In July, I headed up to Readercon in Quincy, Massachusetts. It was a treat to briefly connect with Nnedi Okorafor in between her Guest of Honor duties and nighttime writing to keep up with her deadlines. And it was a thrill to site on a panel with Samuel Delany. We even had a surprise audience member—Junot Diaz. On another panel, I delved into N.K. Jemisin’s Broken Earth series for the second time of the year—such rich themes, imagery, and character packed into those novels! 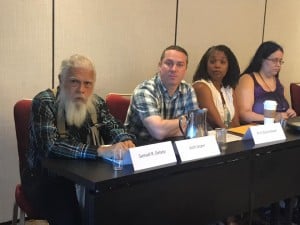 In July, I also participated in the inaugural BlerdCity Conference here in Brooklyn. As always, it was a treat to hear all the different interpretations of the word. It’s invigorating to hear creativity roam through others’ imaginations!

AUGUST
August was another quiet month. I took the time to compile the digital commemoration of the Silent Parade I posted on social media.

SEPTEMBER
In September, I participated in the Escape Velocity Conference in DC. It was another great opportunity to connect with the writing community and share thoughts on topics both literary and theoretical.

OCTOBER
In October, I flew to Colorado and took a ride up the mountain to ski town of Beaver Creek to participate in the Sirens Fantasy Conference. I taught a workshop on Writing What Scares you, sat on a panel about beauty and led a discussion and listening session featuring Octavia Butler’s quotes. It was wonderful connecting with readers, and so many people said they still had the little books from my Guest of Honor speech the year before. 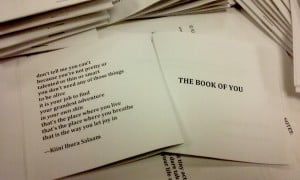 October also found me flying down to Nashville for the first time for a reading at the Third Man Books recording studios. My co-readers were riveting and it was a thrill to be reading in a music space before an attentive and appreciative audience. 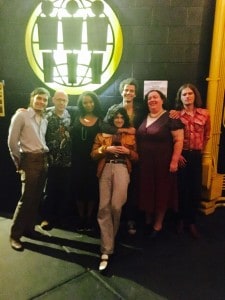 After When the World Wounds was released in November 2017, I promised I’d spend a year promoting the book, and that’s just what I did. Now 2018 will be a year of minimal traveling and writing, writing, writing.

Wishing everyone a productive year ahead!