The Next Big Thing

I was tagged by Ibi Zoboi to write a post called The Next Big Thing. At the same time, I recently completed this year’s mega-installment of The Pleasures of Reading, Viewing and Listening for 2012. So I’m going to mush those two together and make a brand-new post.

Now we all know how to identify our next big thing: it’s the thing that excites us… a lot. And it also terrifies us: It could be a low-grade terror or an all-out panic. That’s because our next big thing will most likely transform us in ways we cannot predict. My next big thing has been a novel–for about twenty years, that’s been my next big thing. In the interim I’ve accomplished TONS of big things: two master’s degrees, loads of international travel, picked up a third language (and lost it), had a child, bought property, and the list goes on. Yet, I am still working on the same big thing I was working on in 1995 when I was traveling the world and getting a taste of my fantasy life.

So before I talk about my next big thing I will talk about circles–or maybe spirals. We know that growth does not happen in a straight line but we never stop expecting it to. It is more likely that it will happen in spirals, looping back around while moving forward on a circular, but ascending path. I achieved another big thing this year in publishing a collection of short stories. I came out of hiding and started to attend conferences and did readings to promote the book. I’m now building community on both Twitter and Facebook in addition to this long-standing blog.

One of my promotional events was a group reading with Linda Addison. When I met Linda Addison in 2000, I was sure my next big thing (read: novel) would be completed soon. The novel I had was a hot mess, and bless the agents and publishers who were kind enough to encourage my writing while explaining why the novel didn’t hold together. Both Linda and I had stories in Dark Matter. As we were promoting the book I learned that Linda was working on a novel based on her story in the book, setting the ancient Yanomami peoples into the far future. Since then, Linda has enjoyed a number of “big things.” Publishing four collections and winning three Bram Stoker awards for horror writing. And like me, she has yet to finish a novel. Ten years later, we are now both working on the novels we were writing when we met. Spirals. 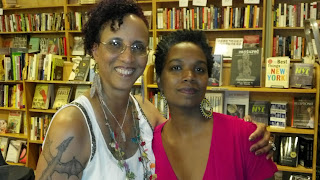 Me and Linda Addison at Bluestockings Bookstore

Back in 2001 I attended Clarion West Speculative Fiction Writers Workshop in Seattle. I heard about it from Sheree Thomas who edited Dark Matter. Before I left, Jennifer Marie Brissett, who owned the wonderful Indigo bookstore, held a fundraiser for me and Ibi Zoboi to supplement the expense of the workshop. Jennifer is now a speculative writer in her own right, and has organized the Kindred Reading Series. There’s a dynamic group of speculative writers of color in New York and I got to meet them when I traveled to Wiscon this year. To date we’ve had three readings, and more to come! 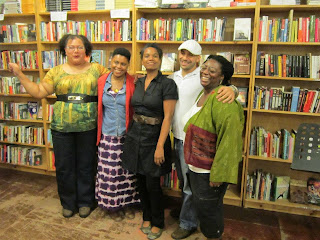 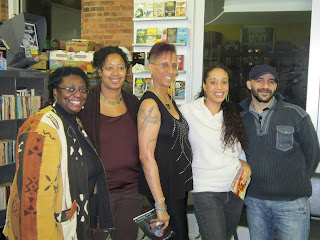 And what about all those writers I met at Clarion West? There’s no chosen anointed one, we are all spiraling upward like mad, using whatever resources and approaches we have at our disposal. And each success spurs the others of us to push ourselves harder, to try–really try–to let out all the creativity we have inside.

• Linda DeMeulemeester was the first out of the gate some years ago, publishing her middle grade Grim Hill Series. • Benjamin Rosenbaum then published the Ant King and Other Stories. • And Stephanie Burgis sold her middle grade fantasy series featuring the incorrigible Kat Stephenson, three of which have been published to date.

Then this year all hell broke loose:
• My collection Ancient, Ancient was published. • Susan Ee self published Angelfall in 2011, which broke into the top 100 twice, spent a few weeks on the U.S. Today bestseller list, and has now been picked up by Amazon’s new publishing arm and optioned to be made into a movie. • Raymund Eich after self publishing his first two novels in 2011, published two more this year, plus a short story collection. • Emily Mah announced, just a few days ago, that after self publishing four chick lit novels (under the pen name E.M. Tippetts), her latest broke into the top 100–officially bestseller status. • Ari Goelman announced that his middle grade summer camp mystery The Path of Names will be coming out from Scholastic 2013. • Patrick Samphire announced that his middle grade two-novel steampunk series was purchased.

And there is more in the works, both Ibi Zoboi and Sean Klein are chipping away at their novels, which brings me to my Next Big Thing:

What is the working title of your next book?

Where did the idea come from for the book?

I started writing this book just after college when I was traveling the world on a fellowship from the Thomas J. Watson Foundation. The Watson is a wonderful opportunity to wander and meet with others around the globe. As I was traveling, I remembered thinking that my identity is just an accident of birth–I could have been born anywhere, at any time. We are all linked in that the human experience–any human’s experience–could have been your own. So the book travels to different human experiences. As it stood–the book was more like a series of short stories, as such it never got published. What I am doing now is taking a story arc that I also created while traveling–the Of Wings, Nectar, and Ancestors trilogy–and layering it over my previously existing novel. It’s like putting two flesh-eating fish in the same aquarium, and allowing them to bite, but not consume each other. I don’t know which one will dominate the other and it’s taking a lot of concentration for me to submit to the exercise because I am uncomfortably unsure of the outcome–even as the journey feels right. Contradictions!

What genre does your book fall under?

I am not fond of labels–neither in literature, nor in life. And I am often in the dark about what it is I’m writing. When I recently commented that I didn’t write horror, Linda Addison pointed out that both “Marie” and “BioAnger” in Ancient, Ancient qualify as horror. I’m inclined to agree, but you will never find me slotting my writing in any one place or another. I think we box ourselves in that way and block our ability to just purely follow our artistic impulses. Artists grow, change, and experiment, so I think avoiding labels helps an artist just do what comes naturally to her. I call my writing speculative and leave it to the critics to make and further labels.

What actors would you choose to play the part of your characters in a movie rendition?

What is the one sentence synopsis of your book?

When a group of teens from another planet are forcibly separated and transported to Earth, their experiences shed light on the human experience and reveals disturbing truths about the future of their own race.

Will your book be self-published or represented by an agency?

Represented by an agency. Self-publishing is wonderful and I have seen exciting developments for writers taking that route. I, however, prefer to have the support of a publishing company. However few marketing dollars they may throw at it, it becomes–at least on the surface–a collaborative experience when another entity is involved.

How long did it take you to write the first draft of the manuscript?

Hmm. About a year and a half. I played with editing it for a while, but it didn’t come together. One of my favorite quotes (I don’t know who said it), is: When the matter is ready, the form will come. Well, I’m back at it, so my assumption is that the matter is ready and the form is currently emerging now.

What other books would you compare this story to within your genre?

I’m sure there are books out there that compare, but I haven’t seen a similar story to the one I’m writing. I’m not an expert on the genre, however. I look forward to hearing the comparisons when the book comes out!

Who or what inspired you to write this book?

What else about your book might pique the reader’s interest?

This book is an unpredictable journey that will take you through emotions, experiences and ideas–not to mention sensations through evocative moments, profound conflicts, and exciting triumphs. *I can’t wait to uncover some of these plot points.*

Daniel José Older’s Next Big Thing. Daniel is a member of the Kindred Reading Series and a wickedly funny writer of urban ghost tales. Read about his next big thing on his blog: http://ghoststar.net/blog/el-sendero-next-big-thing-blog