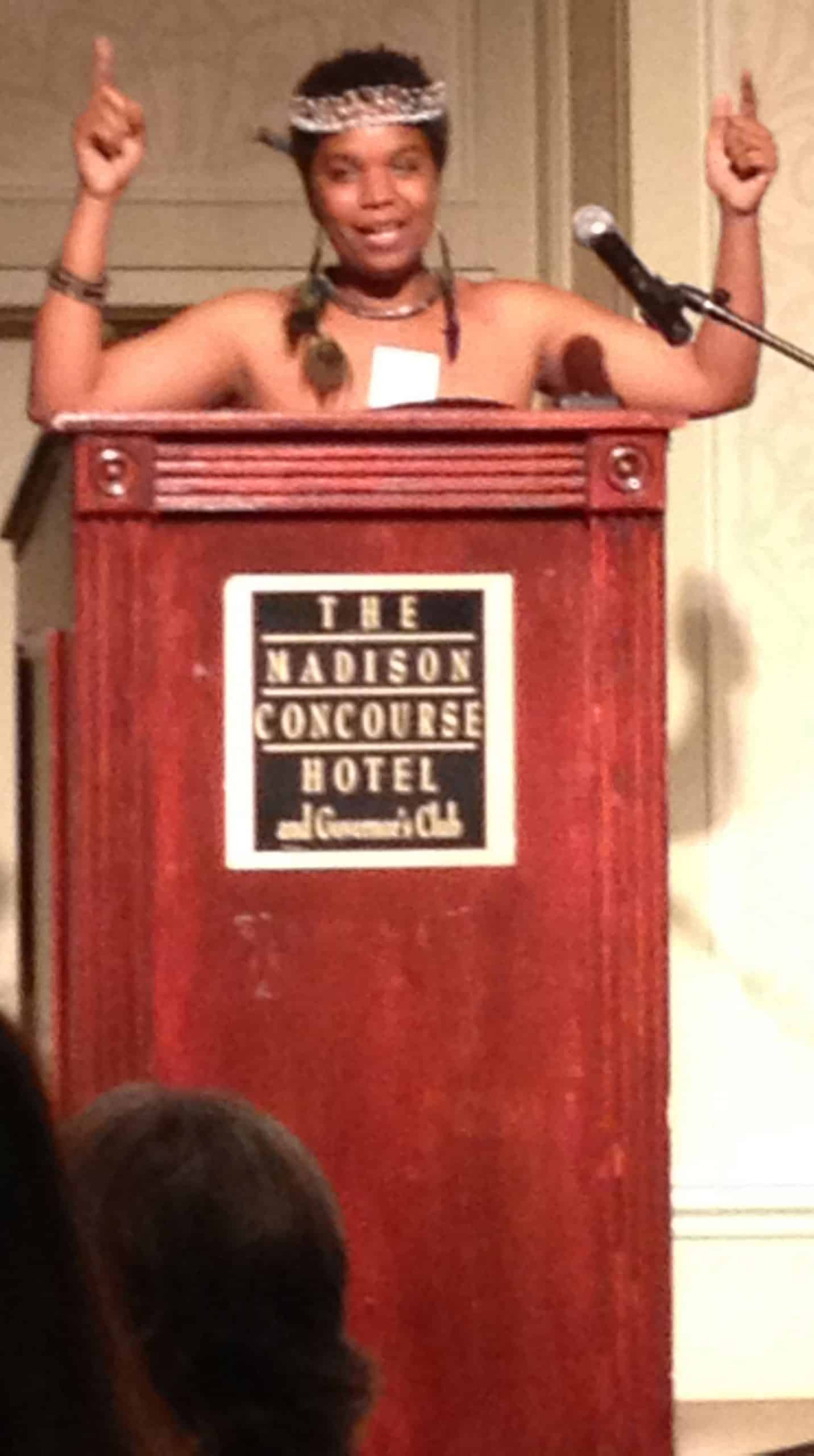 This past Memorial Day weekend I attended my second Wiscon Feminist Science Fiction in Madison, Wisconsin. Last year was my first Wiscon. It was like a rambling carnival of conversation, literature, sharing, and mental expansion. This year I had the added excitement of being the Tiptree winner. (I was looking forward to meeting my co-winner Caitlín Keirnan, but she was unable to make it. I had to carry the crown for both of us.)

I hope to give you a taste of the swirl of magic that is Wiscon. Besides reuniting with wonderful friends and meeting new ones, there are always new experiences to have and new conversations to engage in. On Friday afternoon there is The Gathering, one room with multiple stations of crafts, clothes swapping, tarot card reading, knitting, found poem collaging, and body painting. All of the stations that were there last year were there this year. I made a poem from magazine clippings that turned out more sarcastic than I usually am. (I also ended up writing another poem–a haiku for the earring poetry switch on Saturday night.) I picked up five books for a dollar. Then I got a tarot card reading. Then I checked on my daughter who was on line for the body calligraphy. When I went back to the poetry table a hypnotist approached me and asked me if I wanted an introduction to hypnotism. I went with it—I was at Wiscon after all—but not before telling the hypnotist how nervous the idea of hypnotism made me. He took me down into a place where I imagined myself in a place of fulfillment. It was a super cool experience. When I went back my daughter was sitting in the “tattoo chair.” She was very clear of what she wanted written on her arms: She got the word “Black” on one arm and “Beautiful” on the other. 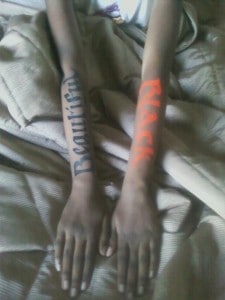 I sat on a panel about creating while busy, which is a topic I’ve written about often. When I returned to my room after the panel, I was surprised by a special delivery from the hotel, a bottle of wine and a fruit and cheese plate. Sweet! I wondered if award winner’s roll like that all the time. 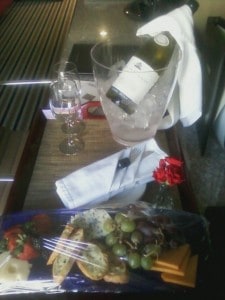 The next morning I sat on a panel critiquing the commercialization of body awareness and self love. Part of the conversation focused on what the exhortation of “Love Your Body” does to people who don’t love their bodies for a range of reasons. We had a challenging conversation covering a range of issues around people who are differently abled, transgendered, and of various sizes. And we discussed how the assertion that you need to learn to Love Your Body puts the onus on the individual for a internal conflict that is due to external messages and cultural program that is constantly triggering feelings of failure and pushing the idea that women need to be fixed.

One of the best parts of attending a feminist science fiction convention is that you don’t just talk about writing. Last year I attended a great panel on children and sexuality. This year, there were panels on polyamory, slurs, race, science, and of course, women. I attended a panel about class (and bought the book Reading Classes) that fit right into some issues I’m dealing with regarding the school system here in New York. Luckily a fellow Clarion grad, Lisa Bolekaja, recorded much of the weekend. Otherwise, I would never have known that they made a cake of book Ancient, Ancient’s book cover!

On Saturday, I made sure my daughter attended the making ice cream with liquid nitrogen kids’ session, before skipping off to the Interstitial Art Foundations’ Interfictions Salon. They discussed all things interfiction—the conversation was great therapy for someone who writes in the genre but really has rambling interests in between. I ran up to thank the editors afterward as they were debuting a new story of mine “The Taming” in their brand-new Interfictions Online Journal. As I was standing talking to the editors afterward, someone came up and gave me a hug and walked away. “Who was that?” I asked. “Will Alexander,” the editor replied. Well, that was surreal.

I ran into Will in the elevator later and gave him a big cheer for winning the National Book Award. Awesome achievement from yet another Clarion grad. He explained the hug earlier was for my comments during the salon about being paralyzed between genres. I thanked him, and scored two more hugs: one for winning the Tiptree and another for being fellow Clarion grad. He’s a super sweet guy, so I’m sure most of the hugs were due to his nature, but it can’t be denied that Wiscon is an environment where people connect, where writers and readers of all histories, stratas, and genres can offer each other insight, support, and encouragement.

There were lots more hugs: hello hugs, goodbye hugs, “You’re Nisi’s mom?!” hugs, congrats hugs, great to see you hugs, love hugs, and “I’m sorry the darkness in my story upset traumatized you” hugs. As part of the Kindred Reading Series with my fab New York peeps–Alaya Dawn Johnson, K Tempest Bradford, Jennifer Brissett, and Daniel José Older–and I read the first half of “Bio-Anger,” a science fiction horror story from my collection. I actually traumatized myself while reading it and found myself getting shaky-voiced and emotional as the story progressed. I also attended a bunch more panels and had tons more conversations. At the Tiptree ceremony, they showered me with gifts. I got chocolate, maple syrup, a T-shirt, an award plaque, a sculpture of a cocoon, and money! So great. 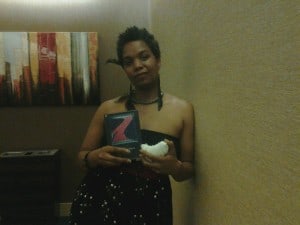 The plaque and the original sculpture–a cocoon for the moths in my Wings, Nectar, and Ancestors trilogy.

Before I gave a speech, some well-respected and super talented writers climbed onto the stage to form the Tiptree chorus and sing an original song for me and Caitlín. The song was done in the round and they separated the award ceremony audience in three parts. It was a ton of fun. After the celebratory song from the audience, I got to address the audience. Before my speech, I could not resist leading the crowd in a hip-hop audience battle. The left side was first and they raised the roof with their voices, the right side brought up the decibel level and blew the other side away. Then the center of the audience yelled like maniacs and left us all dead in the water. It was thrilling. My speech was about finding a way to do your thing. The live speech was a bit spontaneous and improvised. You can read an extended version on SF Signal.

The end of the conference was the Sign Out, a large areas where authors sit at tables and sign books. During the signing, artist Mary Prince added me to her two-page sketch capturing the magic of Wiscon. She even included my cake on the left, and a portrait of me with the Tiptree tiara and my signature on the right. 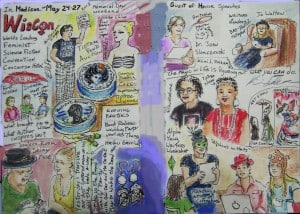 I got to share meals with writers and have lobby conversations with artists and shoot the shit with publishers and shake hands with agents. Coincidentally, today in 1851 Sojourner Truth delivered her “Ain’t I A Woman” speech at the Women’s Convention in Akron, Ohio. Allow me to stretch the bonds of relatedness to muse on the fact that I just delivered a speech at a feminist convention. Because of Truth and so many others, I did not have to assert my womanhood or my humanity to prove my worthiness. It is amazingly wonderful to be able to assert my value just by being myself. I am so aware that I stand on the shoulders of giants, and I do plan on climbing higher.